Beloved, do you want to know what God is doing right now?

We're entering a new month, but this word about what God is doing right now is not confined to this new month. I believe it's a word for this season, spiritually-speaking. And, I believe it is vital.

Here are the 5 things the Lord showed me He is doing right now:

Don't permit yourself to have “itching ears” that only want the most recent hot prophecy. I love prophecy and we should always honor the prophet and the Biblically-true prophetic word if we want to prosper.

However, there are seasons in which God is not so much having the prophets foretell things as He is having them TEACH … and right now, the prophets are teaching because GOD is teaching.

When God is teaching–and when prophets are teaching–the teaching they release is urgent.

Remember that the definition of “prophecy” is to “hear God and say what He says.” Nothing more and nothing less.

Don't let yourself have itching ears. Don't seek out prophecies that tickle your fancy and ignore everything else. Let God teach you right now and always. His teaching is ALWAYS essential for the very moment in which you find yourself. It's rhema, and you have to have it in order to prosper.

2. He is moving people out from under the influence of the spirit of control.

I am not saying that He is delivering people from being controlling themselves, although I'm sure He is. He'll deliver anyone from anything, anytime they need it.

But what I AM saying is that He is moving people, en masse, out from under leaders and influencers who are operating in a spirit of control. If a leader has not stewarded his sacred responsibility to work himself (or herself) out of a job, raising up EVERYONE around him to operate in their own callings and even to be better at those callings than the leader is if applicable, God is allowing those leaders to experience the consequences of his or her actions.

Part of this is a tragic thing, not a joyful thing.

Yes, we should be joyful that people are getting free. FREEDOM constitutes so much of what Jesus died to give us.

Our hearts should be broken across the Body for the fact that any people, ever, are operating in a spirit of control in the first place.

People are not the enemy, folks.

For we do not wrestle against flesh and blood, but against principalities, against powers, against the rulers of the darkness of this age, against spiritual hosts of wickedness in the heavenly places” (Ephesians 6:12).

No human being is our enemy. Only the devil and his minions are the enemy. Let's keep that in perspective.

1. If you have not educated yourself on what the spirit of control is and how to break free from it, you need to do so. It is urgent. 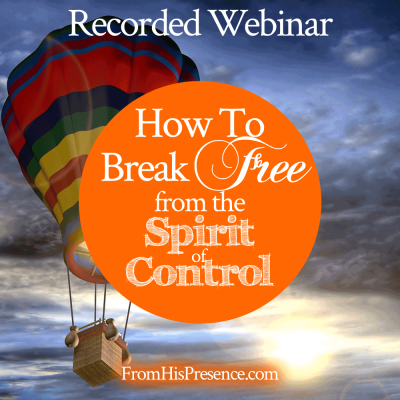 Related: I just released a video class on getting free from the spirit of control, with bonus teaching about the Jezebel spirit. Download it instantly on my Gumroad store if you need equipping for this area of spiritual warfare.

2. If you have been under a situation which is dominated by a spirit of control, LISTEN TO THE FATHER as He is telling you what to do. If that's you, you are NOT crazy. You're not making it up. You're not just hearing things. Remember Isaiah 8:20:

To the law and to the testimony! If they do not speak according to this word, it is because there is no light in them” (Isaiah 8:20).

Get in the Word and compare what the situation you're in to God's Word. Disregard appearances, titles, perceptions, cultures, predetermined mindsets, and outside pressure. Look at the truth, and see if it lines up with God's Word or not.

If it doesn't, get out. Flee while the fleeing's good. Get out, now. Where the Spirit of the Lord is, there is liberty. Follow Him to where there is liberty. Don't stay in a spot where you are being controlled.

3. Pray for the people who are being controlling.

Ask God to give you His heart for them. Pray for their inner healing–healing of all the hurts and wounds that opened the door for the spirit of control to influence their lives. Pray for God's mercy to be on them, and pray for those who are getting out from controlling situations.

3. He is executing justice.

The Lord executes righteousness and justice for all who are oppressed.”

Some of you who read that immediately thought, “People say the Lord is executing justice all the time, but I never see any results. Why should I think now is any different?”

And to you I say:

Remember that God bears looooong with the oppressors, in the hope that they will change their ways. As Jesus said in Luke 18:1-8:

Then He spoke a parable to them, that men always ought to pray and not lose heart, saying:

“There was in a certain city a judge who did not fear God nor regard man. Now there was a widow in that city; and she came to him, saying, ‘Get justice for me from my adversary.’ And he would not for a while; but afterward he said within himself, ‘Though I do not fear God nor regard man, yet because this widow troubles me I will avenge her, lest by her continual coming she weary me.’ ”

Then the Lord said, “Hear what the unjust judge said. And shall God not avenge His own elect who cry out day and night to Him, though He bears long with them? I tell you that He will avenge them speedily.

Nevertheless, when the Son of Man comes, will He really find faith on the earth?”

But even though God bears long with His people, there does come a day in which He shows up in power. He comes suddenly to make wrong things right.

If you are in need of justice, double down and pray harder than you have ever before. Cry out to God day and night, giving Him permission on the earth to act on your behalf.

“This is a popular prophetic word,” said nobody ever. 🙂 Nobody desires to be tested. Nevertheless, God's people are being tested right now.

I believe that right now is a season of hiddenness across the Body of Christ. If you aren't familiar with hiddenness, check out Graham Cooke's powerful teaching called “Hiddenness & Manifestation” here (blog post) with his MP3 on hiddenness versus manifestation here.

Right now is a time in which many of you are being faithful, but you're not seeing the promised results yet. Don't worry. Stick with it.

Many of you are also running low on “feelings” right now. You're on autopilot, existing on faith (see my prophetic word about this here). Don't worry. Stick with it.

And many of you have seen a taste of harvest, but you're seeing interruptions and delays in the area of your breakthrough. Don't worry. Stick with it.

When Father God tests us, He knows that we have the tools we need to succeed. He already gave us those tools through the teaching of Holy Spirit! (See item #1.) Now He's seeing if we internalized those tools; if we listened; if we obey Him in what we know.

If this describes you, be faithful. Stay the course. Do what is right and don't worry about your feelings. The season of hiddenness and delays will pass if you will stay the course.

5. He is warning you about past princes.

I had a dream recently in which an old supervisor of mine, for whom I worked when I was a teenager, suddenly appeared out of nowhere in my life and tried to be friends. However, his motives were not pure. Instead of being true friends with me, he attempted to derail me and pull me into compromising my integrity.

When I woke up from that dream, I heard the Lord say, “Beware your past princes.”

I believe this is a word for the entire Body of Christ. Right now, the enemy is bringing certain people back into your life who used to dominate you. They were the “princes” under whose rule you lived your life. And although they were unpleasant way back when, they seem nice enough now.

Your past princes are not new princes. They are not your knights in shining armor. The story they wrote back then is not going to be any different than it used to be. It's just going to look different at first, but the end result will be worst than the first result if you get pulled back in.

This word can apply to any situation, whether a friendship, job, ministry, or romantic relationship.

However, I feel that this word is particularly relevant for single women who desire to be married.

If you are a single woman who desires to be married, am not going to prophesy that your husband is arriving soon–although I can agree with you in prayer for that–but I do believe the Lord is exposing the enemy's tricks by telling you in advance that you will be seeing your past princes, and BEWARE. Selah.

Beware your past princes!

I heard the Lord say that He is “actively engaged” in these 5 things right now.

“Actively engaged” is a warfare term. He is “engaged” in battle, and it's a battle on your behalf. He is raising His standard against your enemies. Help Him by praying through these 5 points over your own life. Ask Him to intervene in every situation. Speak His Word over each and every situation, and you will see change. Jesus always wins every battle.

Does this word confirm what the Lord has already been showing you about what He is doing right now? If so, leave a comment below! I love to hear from you!

Previous Post: « Should I Tithe On the Net or the Gross?
Next Post: Prayers and Prophecies for Financial Increase (e-book) »

This is the secret to infinite money in the Kingdo

33 seconds of encouragement to STEP OUT IN FAITH T

Progress on my latest quilty obsession. This is th

First evening working on this in a really long tim

I’m not a doom-and-gloom prophet, and I rarely i

I love the praise Psalms. Been studying Psalms 145

I'm SO excited ... I JUST last night released this