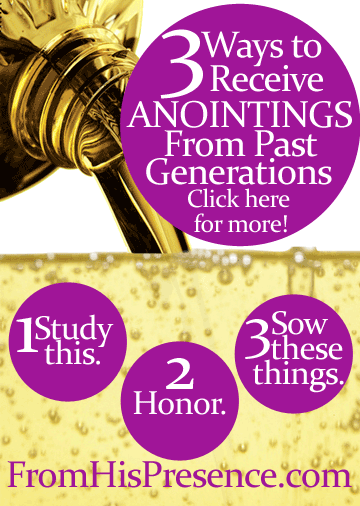 I just finished watching an incredible message for women on GodTV (watch it free on demand here) from Roberts Liardon.

In this message, Liardon basically just told stories about three powerful Kingdom women of generations past: Mother Etter, Aimee Semple McPherson, and Kathryn Kuhlman. He told about their humanness, their frailty, and their failings; but above all, he told about how they chased the vision God had given them and how God used them mightily.

You know what the funny thing is?

While he was preaching, I began to notice–especially toward the end–that he actually preached a lot like Kathryn Kuhlman! (Dr. Liardon actually met Ms. Kuhlman as a child and she prophesied over him, according to his website here.) Many of his mannerisms were similar. His message was similar. I could feel the power of God on him much like I've felt it on Kathryn Kuhlman whenever I've watched her videos. (She died in 1976, but watching her on YouTube is awesome.)

Which made me think…

This is a perfect example of how to receive anointings from past generations.

And during the course of all that, God rewarded him. He dug into old wells of revival, and God let him drink from the water since he took the time to dig it up.

You and I can receive anointings from past generations the same way.

Who's your hero? What did they have that you want?

No matter who your hero is, you can have what they had. Here's how:

1. Study what made them great.

When you learn what made each person so useful in the Kingdom, you'll know what qualities to emulate in your own life. For example:

When you honor your heroes, somehow God sees fit to bring the thing you're honoring into manifestation in your own life. Matthew 10:41 tells us:

Roberts Liardon was honoring Mother Etter, Aimee Semple McPherson, and Kathryn Kuhlman by telling their stories. He also honored them when he studied their lives. And because he honored them, God has placed a deposit into his life of what they had. It's as plain as the nose on your face when you see Liardon preach.

You also can honor your heroes by:

Talk about your hero's ministry. Honor what they did for the Kingdom. When you honor a prophet or righteous person, God will give you a deposit from that person's life.

3. Sow something into your hero's life or ministry.

If you want an anointing from someone in a generation before you, sow something tangible into that person. For example:

Shortly after I was saved in 2001, I began listening to Joyce Meyer. Her teaching made all the difference in the world to me. When I saw that she was going to speak at a conference nearby, I determined to go. Making that trip was a sacrifice. It was a 6-hour drive one way; my car broke down on the way and had to be towed and worked on; I took my own cereal and hot dogs and ate from my cooler the whole time because I didn't have money to eat out. But you know what?

God honored that sacrifice. He filled me with the Holy Spirit at that conference.

And I've never been the same.

God blessed me because I sowed time, effort, money, and sacrifice into going to hear Joyce Meyer… which demonstrated my hunger for God Himself.

Another example: God changed my life when I traveled to Finney's grave in Oberlin, Ohio a few years ago.

While there, I laid on his grave and asked God to give me whatever Finney had that God wants me to have too. My life changed that day and has never been the same. I believe God gave me something there because I honored Finney enough to study his life, visit his grave, and ask for what he had.

(Note: Don't get weird on me about the grave-visiting thing. I went because being in such close proximity to Finney's bones gave me faith that God could do the same thing for me. It was a point of contact, something tangible that built my faith up enough to where I could ask God for something big, because He did something big for Finney.)

If you want what someone else has or had, sow something sacrificial into that person or that person's legacy.

So that's it. Study what made your heroes great, and emulate what they did. Honor them. Sow your money, effort, and actions into their ministries. If you will, God has promised to reward you for it.

Who is your hero? What can you do today that will help you receive their anointing? Leave a comment below!

Related: How To Find a Spiritual Father (3-part series)

Image courtesy of the United Soybean Board on Flickr.