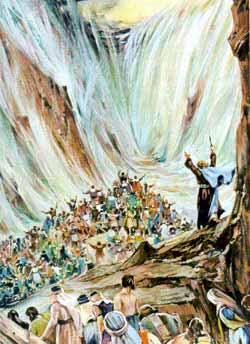 Are you being pursued by enemies? If so, I have good news for you today: God has a plan in mind… and you're going to like it.

“Thus says the Lord, who makes a way in the sea and a path through the mighty waters, Who brings forth the chariot and horse, the army and the power (they shall lie down together, they shall not rise; they are extinguished,  they are quenched like a wick)…”

These verses are referencing the way God drowned the entire Egyptian army in the Red Sea when the Israelites were leaving Egypt. See, a long time ago, the Israelites were slaves in Egypt. After 400 years of slavery, God miraculously delivered them. Pharaoh actually kicked his own slaves out of the country.

The Israelites left Egypt suddenly, and they carried all the spoils of Egypt with them. But then Pharaoh changed his mind, and the Egyptian army went after them. The Egyptians trapped the Israelites at the Red Sea. But Israel escaped again. Exodus 14:21-22 tells us that God actually parted the Red Sea for the Israelites, and they all crossed the sea on dry ground.

Then the Egyptians pursued them. (Big mistake, Pharaoh!) When those Egyptians got in the middle of the sea, God caused the sea to go back where it belonged, and He drowned the entire Egyptian army.

Now here's the cool thing that applies to you and to me:

The verses above from Isaiah 43 tell us specifically that God “brought forth” the Egyptian chariot, horses, army, and all the Egyptian military power. This means that God pulled the Egyptian army out of Egypt. God sent those Egyptians after Israel.

So God could annihilate the enemies of His people.

If you feel like you are being pursued without cause by enemies that you can't get rid of, this is good news for you. Our Heavenly Father is REALLY attached to His people. He loves you and takes care of you. When you have enemies, if you will just step back and allow Him to deal with them, He will. God says in Deuteronomy 32:35: “”Vengeance is Mine, and recompense; their foot shall slip in due time; for the day of their calamity is at hand, and the things to come hasten upon them.’”

God takes vengeance on behalf of His people. Vengeance is not our job; it's His.

And sometimes God allows enemies to come after you because your enemies are His enemies, and it's His time to deal with your enemies.

Romans 10:11 says, “For the Scripture says, “Whoever believes on Him will not be put to shame.””

Are you being chased by enemies? Claim these promises from Romans 10:11, Deuteronomy 32:35, and Isaiah 43. Ask God to protect and defend you. You will not be put to shame.

How does this message speak to you? Do you see any other gems in these passages? I'd love for you to leave a comment and share your ideas!

Previous Post: « How to Know That the Bible Is True, Part Three
Next Post: Your Secret Source of Power »

This is the secret to infinite money in the Kingdo

33 seconds of encouragement to STEP OUT IN FAITH T

Progress on my latest quilty obsession. This is th

First evening working on this in a really long tim

I’m not a doom-and-gloom prophet, and I rarely i

I love the praise Psalms. Been studying Psalms 145

I'm SO excited ... I JUST last night released this