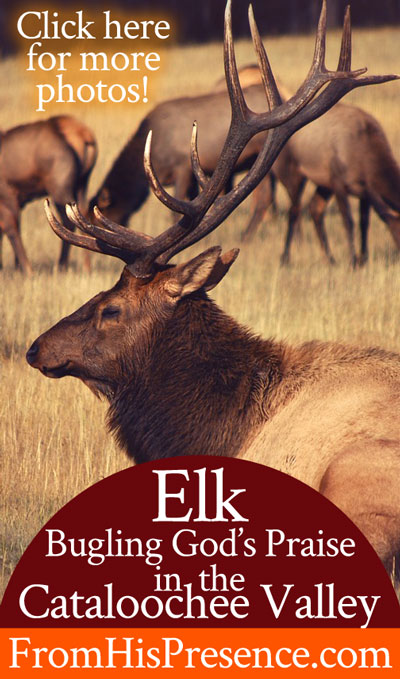 If you want to hear animals praise our Creator, go see the elk in the Cataloochee Valley.

Did you do a double-take when I said the elk praise God? Don't be surprised! Scripture tells us that all creation is praising the Lord, right now. Right this very moment. Revelation 5:13 describes it this way:

‘Blessing and honor and glory and power be to Him who sits on the throne, and to the Lamb, forever and ever!'”

Not only that, but the animals are actually preaching about God to you and me right now. They're preaching the attributes of God.

“For what can be known about God is plain to them, because God has shown it to them. For his invisible attributes, namely, his eternal power and divine nature, have been clearly perceived, ever since the creation of the world, in the things that have been made. So they are without excuse” (ESV). 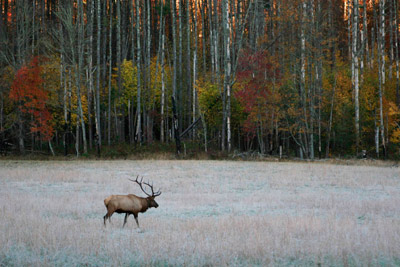 If you listen for the sound of the created world praising God, you can hear it anywhere. It's especially loud and clear coming from His animals.

The Cataloochee Valley, which is part of the Great Smoky Mountains National Park, is home to a large herd of elk. When Bruce and I visited the Cataloochee the first time, we saw about 40 elk in one place, in addition to several stragglers throughout the valley. 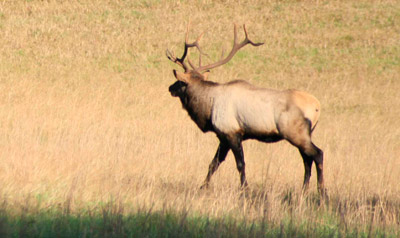 We were there in autumn, which is mating season, so the bull elk were bugling. Their bugle calls were amazing.

If you've never heard an elk bugle, the best way I can describe it is to say that it's actually musical. 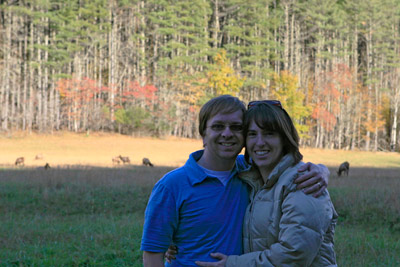 An elk bugle call sounds like a trumpet fanfare. The elk opens his mouth wide, starts at a low note, switches to a high note about an octave above, then sings the scale all the way back down. The elk bugle can also include various grunts, peeps, squeaks, and other noises.

The bugle call is loud; you can hear it hundreds of yards away, maybe more. It's a gorgeous, incredible sound that will knock your socks off.

Here is a link to a great YouTube video of the Cataloochee elk bugling (or watch the video below): (Video © GSMA 2012. All rights reserved. www.smokiesinformation.org).

When I heard the elk bugling for the first time, I was amazed at first… then awestruck.

Literally, you can imagine the sounds these magnificent animals are making as sounds that would be fittingly heard before the throne of God. I believe these animals are actually releasing a sound of praise to their Creator through their bugle calls.

Yes, I know; they're part of the elk mating season too. I totally get that. But you can't listen to the sound of elk bugling and not be awestruck … and only a magnificent Creator inspires that kind of awe. I'm convinced these guys are giving God glory.

Remember the song of all creation quoted above (from Revelation 5:13):

And every creature which is in heaven and on the earth and under the earth and such as are in the sea, and all that are in them, I heard saying: “Blessing and honor and glory and power be to Him who sits on the throne, and to the Lamb, forever and ever!” (emphasis mine). 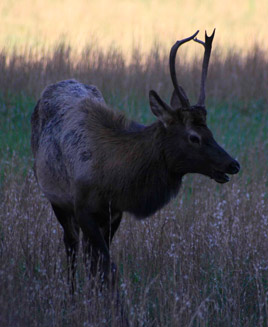 If you were an elk, wouldn't you want to practice up for a speech like that, too?

If you want to sharpen your ear to hear God's praise in nature, I highly recommend listening to the musical CD “I Am: 365 Names of God,” here, and paying attention to the background music. You will hear sounds very much like the elk, as well as other atmospheric noises–sounds you can and should start to identify as the song of all creation to its Creator!

Do you have a story you can share about seeing or hearing creation worshipping God? Please leave a comment below and share your story! I'd love to hear it!

I'm praying earnestly for partners who will help me in my work of being a domestic missionary. Is Papa calling you? Find out why, how, and what's in it for you here.

You'll get an email when new content is posted, as well as exclusive prophetic words, teaching material, and more. You'll also receive my new Supernatural Lifestyle Toolkit (a $28 value) for free when you confirm!

Note: The elk photo in the pin at top is not my photo, but it is used with permission. All the others were taken by either my husband or myself.