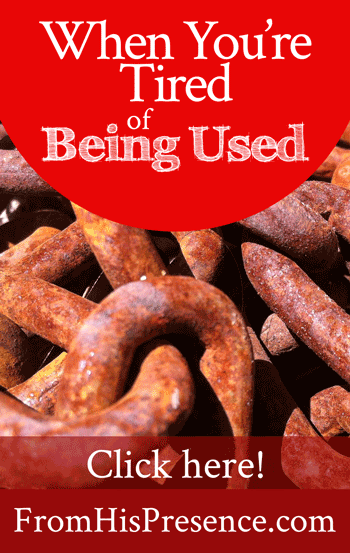 Can we talk? Pretending we're sitting across the table in your kitchen, eating chocolate together, and really talk for a minute?

I get so many emails from various sisters and brothers around the world. Every day. And lately, many of them have a common theme:

People are tired of being used.

Precious sisters have emailed me saying that they are praying for their live-in boyfriends to marry them.

Parents have emailed me saying that their children moved back into their house uninvited, and they want them to leave.

Wives have emailed me saying that their respective husbands have cheated on them over and over, and they just want their husband to stop cheating.

The examples could go on and on. But I won't elaborate because I don't want to depress you. If you're being used, you know it.

Beloved, if you're being used, you–and only you–can put a stop to it.

Because you, and only you, are allowing it.

I'm not criticizing you here. As Joseph on The Princess Diaries II said, “Sometimes the heart does things for reasons that reason cannot understand.” I know what it's like to love people with all my heart, just like you love the people in your life. Even when they're difficult.

So my heart goes out to you.

I wish I could help every individual who has emailed me. (And if you're one who has contacted me, know that I read your email and I've prayed for you.)

But this is the type of situation that cannot be solved by empathy. If you're being used, the problem can only be solved, beloved, when you acknowledge the TRUTH.

And the truth is:

If you own a house and someone moved into it without your permission, you have the legal right–even the duty, I might say–to kick them out.

If you are in a marriage in which your spouse has been unfaithful, you have the right to leave them.

Do you have to forgive them? Yes (Matthew 6:14-15). But forgiveness and letting someone continue to use you is not the same thing. Not even Jesus says you have to stay (Matthew 19:1-10).

And if you are in a sexual relationship with someone to whom you are not married, that is called fornication. It's sin (1 Corinthians 6:18), and it's not going to be blessed; and either your partner is using you or you are using your partner (or both).

Beloved, if you're hurting, I feel bad for you. My heart goes out to you. But only acknowledging the truth can get you out of a bad situation.

If someone is hitting you, demeaning you, or locking you in a room, that's abuse. You will not get free of it as long as you think it's normal.

However, as soon as you acknowledge that you're being abused, you'll find yourself much better positioned to do something about it.

The same is true if you're being used in any way at all.

It's not your job to provide for your adult children if they're capable of living on their own. And by trying, most of the time, you are actually enabling them. You are allowing them to learn that they can mooch off you as long as they want, and experience no consequences.

As Ray Hughes says, “When you get saved, God will give you a new heart. But you have to grow you a backbone.”

It's not your job to let people just move into your house because they want to.

Hey, it would be a great world if we could all just move into an all-inclusive resort somewhere, and live rent-free while everybody else takes care of us. But that's not how the world works.

How the world really works is that you have free will. Everybody else has free will too. We all make choices. And we have to learn to take responsibility for our own choices …

… which requires experiencing the consequences of our choices.

It's also not right to stay in sin and expect God to bless it.

This is a prayer request I get really frequently: “Pray for my boyfriend, with whom I'm having sex, to marry me. I love him.”

Beloved, if you're in that situation, I'm sorry you're hurting. And I do pray for you. But I can't pray for your boyfriend to marry you.

Because if that boyfriend were a godly man who cares about you:

He'd love you enough to treat you like the princess you are. He wouldn't be using you.

And it's not strictly the man's fault. This truth applies to women too.

Dear sister, if you're in a sinful relationship, you know you're not living right either. It takes two to have sex. And your conscience is pricking at you. You know it's wrong; and that's why you want to get married.

So how do I pray for you? I ask God to convict you of your sin; to help you flee from temptation; to show you His better plan; to show you how much He loves you; and to bring you the right husband that Father has for you at the right time–and to deliver you from every man who'd be wrong for you.

Because you were made for better.

You are the King's daughter, and you are glorious within and without, and Father has a higher way for you that He will show you if you will follow Him. He will bring you out of this and help you.

But you have to be willing to obey Him, forsake sin, and seek Jesus first.

Sometimes “helping someone” doesn't look like you think it looks.

Sometimes helping someone means you force them to grow up and live out the consequences of their own choices.

Sometimes loving someone doesn't look like you think it looks. Sometimes it means you refuse to participate in a toxic or sinful situation with them.

And sometimes loving yourself looks a whole heap different than you thought it did. Sometimes it means standing up for what is right, and refusing to let yourself be a victim any longer.

This is the truth. It's the plain, honest, said-as-sweetly-but-also-as-openly-as-I-know-how kind of truth.

But this truth can make you free.

You don't have to let yourself be used or abused any longer. You can choose to stop the cycle.

You can love yourself enough to read in God's Word what He says is best for you and for others, and choose to seek that instead.

Previous Post: « 3 Things To Do When Depression Overwhelms You
Next Post: All You Have To Do Is Outlast The Storm »