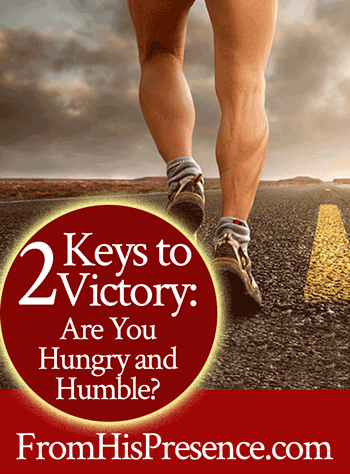 Beloved, do you desire to accelerate your growth in God? Do you want to see the complete victory that Jesus purchased on the cross for you manifest in your life? If so, there are two big keys to victory with which I want to challenge you today: you must be hungry and humble.

As you know, I just returned from teaching a prophetic equipping/mentoring intensive in Dublin, Ireland. God moved so powerfully. It was unreal; it went beyond my wildest expectations. But you know what made it possible for Him to move so powerfully? Simply this: our mentees were hungry and humble.

Hungry and humble. It's a powerful combination.

They were hungry for God. When I say that, I mean:

Every mentee was just precious, and we were so honored to meet them. But I just can't get away from how hungry they were and are!

Related: How to Get Promoted Really Quickly

And because they came with that hunger, Father God and His Spirit moved in power in every one of their hearts.

Holy Spirit encouraged them. He healed wounded places in each of their spirits that they did not know could be healed. He taught them so many keys they would need to know to move forward with their ministries.

Because hunger is a breeding ground for miracles.

When you are hungry for God–and hungry to see Him move–you will get what you expect. Your hunger opens you up to Him and allows Him to pour into you. And when you are humble as well, you submit yourself to God and His Word and all limitations are removed.

Therefore submit to God. Resist the devil and he will flee from you. Draw near to God and He will draw near to you. Cleanse your hands, you sinners; and purify your hearts, you double-minded. Lament and mourn and weep! Let your laughter be turned to mourning and your joy to gloom. Humble yourselves in the sight of the Lord, and He will lift you up” (James 4:7-10).

“But without faith it is impossible to please Him, for he who comes to God must believe that He is, and that He is a rewarder of those who diligently seek Him.”

When you're hungry and humble, you come to God EXPECTING:

When you expect God to keep His Word like that, He can and will do miracles.

Do those three words describe you? Are you hungry and humble?

Are you seeking Him, hiding His Word in your heart, and believing what His Word says in its entirety? Have you fully submitted to His Lordship, and do you expect miracles from Him?

I hope the answer is “yes,” but even if it's “no,” it's easy to get that way. How? Just toss a stick of “dynamite” into the log-jam of your spiritual life. For example:

Becoming hungry for God isn't rocket science. All it takes is the earnest desire of your heart to know Him. So I ask you again:

Are you hungry and humble?

And if not, what will you do today to become that way?

Is Holy Spirit urging you to rekindle your hunger and humility before Him? If so, please leave a comment below!

Previous Post: « The Jezebel Spirit Wants To Kill You (How To Stay Safe)
Next Post: Prayer for Weight Loss and Health »