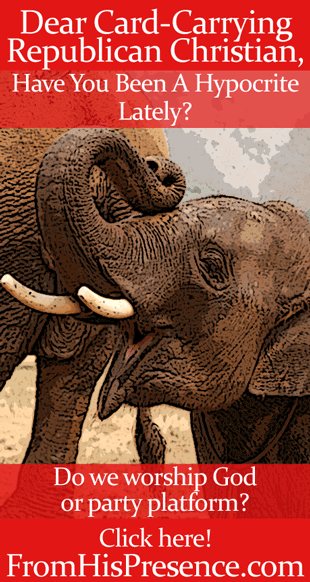 I might make some trouble today. Are you ok with that?

I figure you are, because you're reading. If you're not, go ahead and stop reading now. I won't mind.

So a few preliminaries first:

Lest all the Republicans get mad at me right away, let me say that as far as card-carrying Republicans go, I are one.

There. Now you know. So in case you are a card-carrying Republican too, please take notice that we're on the same team here. I hope you won't get mad if I address a very, very controversial issue.

Now that that stuff is out of the way…

Here's the very controversial political AND religious issue I want to address today:

Dear card-carrying Republican Christian, have you been a hypocrite lately?

I was just wondering. Because I don't know when this happened, but somewhere along the line, we Christians seem to have developed the idea that we get an opinion on political matters.

Yes, you read that right. If you're a Christian, you don't get an opinion on political matters. Why?

Because the only opinion about political matters that, well, matters, is God's opinion, as described in His Word, the Bible.

And yet, we forget this.

The example that brought all this to my attention, that I've been pondering for years:

Before a presidential election about eight years ago, I heard a Christian sister say:

“I’m going to vote along the lines of the economy. The economy is the most important issue.”

And I was shocked.

This person is a true Christian. She’s deeply grounded in the Word. She has character in spades. She’s reputable, loving, and kind. She has a heart after God, and she knows God.

But there were many moral issues on the ballot for that election. Issues ranging from the sanctity of life, to the protection of the unborn, to protecting marriage between one man and one woman, and more.

But this woman didn't seem concerned about the moral issues. She cared most about the economy.

And for any Christian to say that the most important issue in any election is the economy—how we can line our own pockets—is hypocritical.

This woman’s statement was totally unbiblical. And she’s not alone.

Why? Because we have a ton of people out there who claim to be conservatives and/or Christians. Even though these folks may be spread across several different political groups, the Republican party is iconic for this.

(And since I are one—a bona fide, card-carrying Republican—I feel comfortable talking about this issue especially as it relates to Republicans).

Yet so many of these people—card-carrying Republican Christians—totally ignore the Word of God when it comes to their political decisions. Party platform has become their god, and they worship it at every opportunity.

Abortion? God says, “You shall not murder.”

Yet we have a ton of Christians voting for politicians who support abortion.

Gay marriage? God says homosexuality is sin. And Biblical marriage—the only kind of marriage there is, since GOD instituted marriage—is between ONE man and ONE woman.

Yet we have supposed Christians voting for people who support gay marriage, and even Christian pastors and churches ordaining and endorsing gay marriage.

Immigration? God says “You shall not oppress the stranger and the foreigner within your gates.”

But do we listen? Noooo. We get out the party platform and beat it to death because, after all, man does not live by bread alone, but by every word that proceeds from the mouth of the Republican party.

So we completely ignore the Word of God and harp on our party platform, ignoring the plight of the widows, orphans, and strangers within our gates.

And if we as Christians act on, believe, or vote for anything that contradicts the Word of God, we are hypocrites.

See, when you gave our life to Christ Jesus and asked Him to forgive your sins and give you eternal life, YOU LOST YOUR RIGHT TO YOUR OWN OPINIONS.

And anything that is not just like the character of God is wrong. It is SIN.

So now that we don’t have the right to our own opinions, what should our opinions be based on? The Word of God.

Your opinion, AND YOUR VOTE, should be based on the Word of God alone.

None of us as Christians have the right to do otherwise. God’s Word is 100% true. The Bible is the inerrant, infallible Word of God, and if we don’t obey God, we’re in sin.

Related: How To Know The Bible Is True

That means if we put our pocketbook, bank account, or desire to support a friend who wants to marry his or her gay partner, we’re in sin. And if we call ourselves Christians, but don’t obey God or honor Him with both our beliefs and our votes, we are hypocrites.

That’s simply all there is to it.

Righteousness and justice are the foundations of God’s throne. God is righteous and He is just. We, as followers of Christ, are to be holy like He is holy. We are to believe what He says. We are to do what He says. And we are to submit every aspect of our lives to His Word.

Image courtesy of Christian Haugen on Flickr via Creative Commons license. Image has been edited and graphics added.

Previous Post: « Confession: I’m Not An Evangelist (And I’m OK With That)
Next Post: The Best Inspirational Novel I’ve Read In Years »