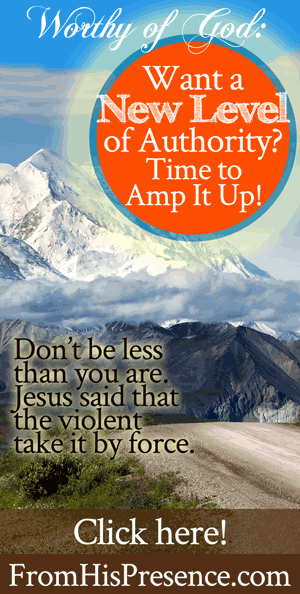 In what level of authority are you currently walking? Do you have:

And to what level of authority and influence are you called?

Because, beloved, if your current sphere doesn't match your calling, I want to encourage you to amp it up today.

I have a friend who recently became tired of her job in the medical field. She worked hard day in and day out, but she was extremely frustrated.

Why was she frustrated?

Because no matter how hard she worked or how excellent her work was, she would always be the lowest-ranking person in the office. It wasn't possible for her to climb any higher.

My friend was frustrated and upset because the greatness God placed in her spirit was too large for her environment. She was feeling a bottleneck of anointing and power.

All powered up, no place to go.

So she applied for another job—and got it. The new job is a job with a huge company, a fantastic career path, and no limitations on how far she can go. She’s over-the-moon happy in her new environment, because now she can do work that is consistent with the dreams inside her.

Does her story sound familiar? Are you in a similar place of dissatisfaction? 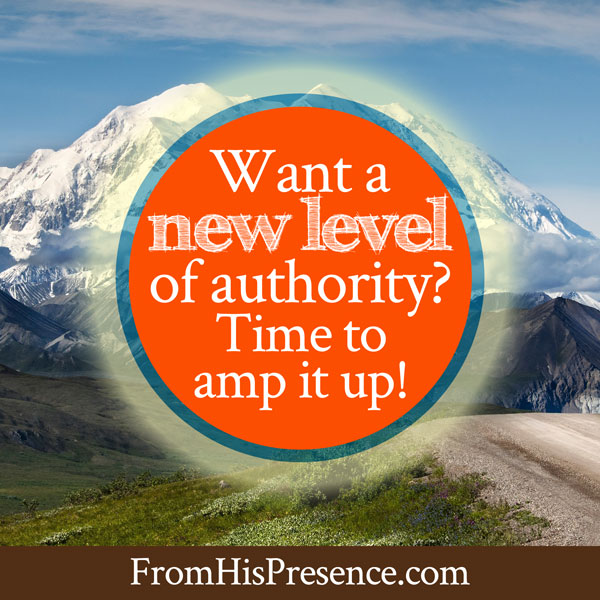 God honors both small and large circles of influence.

However, throughout the Bible, God’s people are called over and over to have a worldwide influence. Is there something burning inside you that tells you that you are called to nations?

If you’re called to authority in the home, and you feel that’s the purpose for which God made you, there’s everything right with that and nothing wrong with it at all. Take authority over your home and family, and rock it every day. If you’re already in that place and walking fully in your call, then you’ve got it made.

But if you dream of a different scope and level of authority—if you dream of influencing your nation or even multiple nations—what are you doing to make that happen?

Jesus said the violent take it by force.

Years ago, I heard one of my role models, Lou Engle, a modern-day apostle of fasting and prayer, describe how a preacher had challenged him in his youth with this question:

When he heard that question, Engle fell to his knees at the front of the church and cried out to God with all his heart: “God, give me a 10!”

Today, on a scale of 1-10, Lou Engle has a “12” level of influence. He’s off the charts, and God placed him there—because Engle wasn’t afraid of being who he is. He wasn’t afraid to chase the dream.

He wasn't afraid to amp it up and chase the Voice.

Recommended resources: Mark Batterson's brand-new book Chase The Lion: If Your Dream Doesn't Scare You, It's Too Small is messing me up BIG-TIME. If this Worthy of God series about dreaming bigger dreams is rattling you, then please run don't walk to get Chase the Lion. You can grab it on Amazon here (affiliate link).

Either of these books would make fantastic Christmas gifts!

So here's the question: Are you also willing to chase the dream, the call, the Voice of your Beloved?

This is not a guilt trip. If you’re not yet walking in the level of authority to which you’ve been called, that’s okay. Life and growth and ministry and calling and influence are all PROCESSES.

But the real, telling issue is this: are you taking steps that will help you arrive at that level of influence?

Because if you’re not taking steps that will get you to that level of influence, then I need to ask you this deep, probing question: why aren’t you?

For some, the answer to that question is laziness, lack of passion, or poor time management. But for most, the answer is fear:

Related: Encouraging Word for You If You're Struggling With Fear

And for those of you who are afraid, I want to speak this word to you today: Beloved, don’t be less than you are.

Who you are was ordained by God Himself before the foundation of the world. God the Father, the Creator, Maker of Heaven and Earth, conceived you in His mind’s eye long before your mother’s egg and your father’s sperm came together. Who you are is not determined by what other people think about you.

Let me say that again: who you are is not determined by who acknowledges who you are.

Frankly, dear friend, who you are is not up to people. #SorryNotSorry

It’s not up to other people to approve or disapprove of your call and your DNA. Who you are was divinely ordained by the one and only Living God–the God who knew you before He formed you in the womb.

God put you on earth at this time and in this place for a purpose.

He has uniquely created and qualified you for your purpose, because:

Related: 5 Reasons You Need a Blog If You're Called To Ministry

YOU. YOU are God’s agent of the hour. You can shape history. YOU are the one person God has chosen to change the world in your generation. 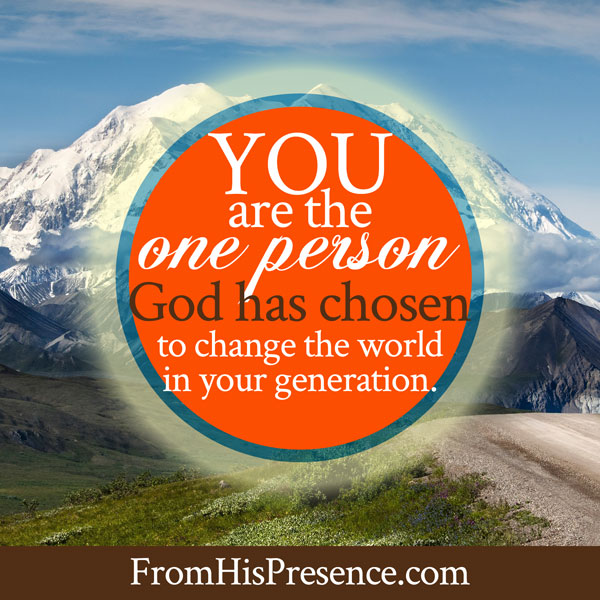 Do you have to be under authority? Yes. As I taught in Kingdom Authority 101, YOU MUST BE UNDER AUTHORITY IF YOU WANT TO HAVE AUTHORITY.

You can only have authority to the extent that you have submitted yourself to someone else's authority. Period.

But that doesn't mean you pretend to be weak. Humility and power are not mutually exclusive. They go together. One is required for the other. (Click here to tweet that!)

So don’t be less than you are, beloved.

God our Father made you who you are.

Only you can do what He has created you to do. And you can only thrive when you’re being the fullest, most complete, most genuine, true-to-creation YOU that you can possibly be.

It’s challenging because it requires you to step out:

But if you refuse to acknowledge who you are and who God made you to be, you are robbing yourself, robbing the world, and insulting God.

Where would we be if Jesus had refused to see Himself as the Savior of the world?

Ah no, beloved. Don’t insult the Holy Spirit by refusing to acknowledge who and what He has made you to be, to do, and even to become.

You can arrive at the place to which you’re called, one step at a time.

Papa God has called you to this. It doesn’t matter what people will think.

You’re a lover of God and of people, and you love both God and people so much that you aren’t going to let the world suffer for lack of your influence.

You are a warrior. You were born for this.

So go ahead. Go big until we go Home. Don’t be less than you are. It's time to amp it up.

The violent take it by force.

Is this word resonating in your heart today? If so, leave a comment below. I'd love to hear from you!

Read the rest of this series:

If you'd like to help me, please check out the partnership details and products available for sale here. And, thank you in advance for helping make this blog and everything we do together for the Kingdom possible!

Previous Post: « Beating the Spirit of Poverty When It Attacks Your Calling
Next Post: Huge Testimonies About What God Is Doing! and Personal Update »